A Summer to Remember: Going on field trips again for the first time 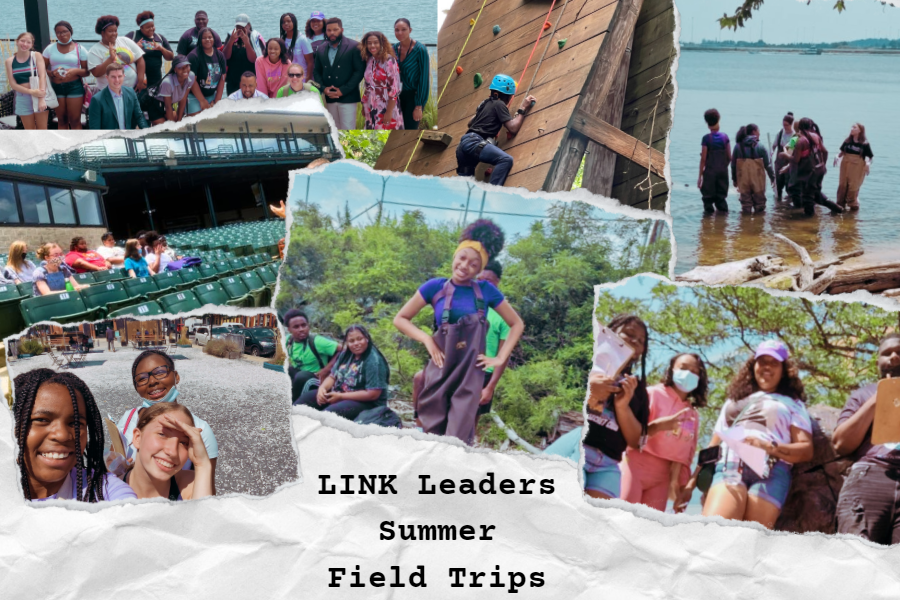 A Summer to Remember: Going on field trips again for the first time

One of the most exciting parts of preparing for the Summer 2021 session of LINK Leaders, was our ability to order buses and plan for in-person field trips. We would have six summer Fridays to scheme, execute, and enjoy. For me, it was the highlight of my summer and, after over a year online, reminded me how much I love being around youth and their ridiculous energy. Maybe I was imagining it, but every Friday seemed infused with a little extra joy and a little less complaining. Everyone just seemed grateful for the chance to get out and interact with people we weren’t related to.

Visiting Outward Bound has always been one of the highlights of a LINK Leaders Summer and the facilitators and the youth did not disappoint this year. After a morning finding ways to problem-solve and communicate with each other, kids were soon clambering up climbing walls and jumping off poles. As we were preparing to leave Leakin Park to head back home, I looked around and grinned as so many of them were feeling proud of themselves and suddenly confident in their abilities. My own four-year old is always running up to us, proud of her newfound ability to twirl or jump off the highest part of the stoop. Teenagers, rarely do this. They keep their best moments to themselves, play it off like it’s no big deal. And so, hearing kids say, “I’m so proud of myself!” was a highlight.

The plan for the day was a college tour at Bowie State in the morning and a stadium tour in the afternoon to hear from Phil Wrye, the Assistant General Manager of the Bowie Baysox, about a career in sports. We had to pivot when it was clear that Bowie State was not going to let us on- campus due to their strict COVID protocols. So, I looked around for a place close to home and found an outdoor space that would be new to most of us. Greenmount Cemetery was a revelation. It’s more historical park and garden than cemetery with a variety of rare and unusual trees, incredible landscaping, and a who’s who of Baltimore history buried 6 feet down.

The kids were so engaged on this Friday. They worked to raise the sails, measure salinity of the Harbor, learned about marine navigation, studied oysters and their anatomy, caught fish and examined them, and enjoyed the sights and sounds of being on the water on a perfect summer day.

A laid-back day sandwiched between two active and challenging Fridays. We spent some time in Graffiti Alley and checking out some neighboring murals before heading to Patterson Park and climbing a scary spiral staircase that took us to one of the best views of the Harbor. We took an ice cream break before heading to Johns Hopkins University and walking around a bit and talking about JHU and college choices.

Kayaking with the Paddle Project, July 30

Another awesome Living Classrooms program brought us back out on the water but this time under our own power. We learned to paddle, communicate, and not panic while employees from the National Aquarium taught us about the wetlands area adjacent to Fort McHenry and U.S. National Park Service rangers taught us a bit of local history.

Our morning was spent on a self-guided scavenger hunt to a few historic points around Baltimore’s oldest neighborhood: Frederick Douglass’s home, the Caulker’s houses, the oldest urban dwelling in the city, and the former Rec Pier, which now houses the Sagamore Pendry hotel. Three of our students finished the 1-mile walking tour in just 45 minutes and came away with some Amazon gift cards as a prize!

Our afternoon would be spent at the Pendry Hotel hearing from some of their team members about their career and their journey from high school to the hospitality industry. They were so welcoming and enthusiastic. After getting a quick history of the building from Peter Schratz, the Director of Sales, we were escorted through a gorgeous open-air courtyard that runs through the whole middle of the building, out to a breathtaking infinity pool. We were brought over to a corner cabana, ordered some refreshing lemonade, and as we ate lunch where we were treated to an informal career panel. We heard from a current high school student who works as a host at the pool, the general manager, event managers, Human Resources professionals, and transportation specialists. The kids were energized and asked a lot of great questions ranging from what celebrities have stayed there, to how much a wedding on-site costs, to job-specific questions about education, hours, pay and travel perks.

As the career chat was winding down, our chartered water taxi arrived at the Pendry’s private dock. We were soon led out of the pool area and down towards the water where we met Sunny, the boat captain, and Stacy Steinberg, the Director of Sales and Marketing for Baltimore Water Taxi. She answered a few questions from the students, and we took off to the Inner Harbor.

The visit to the Pendry was a great capstone to a wonderful summer. It motivated some students to work on their resumes, got others to think about a career in hospitality or adjacent fields, and had all of us dreaming about being able to host a party in a pool cabana someday. Thank you to Peter Schratz, who set the whole thing up, and everyone who helped make our afternoon amazing.